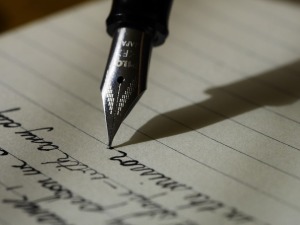 I wrote most of the words in my two books during NaNoWriMo, the first in 2013-2014, the second last year. This year, I am continuing the tradition. This time around, I’m actually writing fiction for NaNoWriMo, which his more appropriate since it is supposed to be about writing a novel, after all. I’m finishing up a fun tale I started in April. On Halloween, it sat at 4,640 words, and now, before I begin writing today, the 12th, I’m at 9,425 total words. My goal is to hit 30,000 words by the end of the month. That is short of a novel, in the novella range, I guess, but if the story fits in that space, it fits.

Here’s an excerpt from the new story.

My bed never looked more inviting. I took off my jeans and threw them on the floor, then walked over to the small black and white TV set I got for my birthday and turned the knob. A rerun of one of my favorite episodes of Stellar Warlords was on. It was the perfect thing to fall asleep watching. I didn’t even bother changing into my PJs before turning back the covers and propping myself up on my pillow.

Captain Schattmore of the Spacestar Thunderhawk was stuck on a desert planet with his arch enemy, the Martian Emperor Lar’sonis. Schattmore was one of the coolest heroes in all of science fiction. He was smart as well as strong, and had a predilection for alien women in skimpy outfits. (I wouldn’t mind if my future wife had purple skin and antennae if she was as pretty as Lunetta Ludbaalaup from Galaktika-III.) The head Martian bad guy, Lar’sonis, was a perfect foil to Captain Schattmore. Lar’sonis had four arms ending in claws, a slitlike nose, and enormous glowing red orbs for eyeballs. He wore a suit of high tech armor with all sorts of futuristic gadgets on it.

In this episode, though, aliens had sent these two mortal enemies to a strange planet where they had to fight one another without the benefit of any of their technology. No phason pistols, no communicatrix, no force field armor, nothing. Of course, the planet was full of all sorts of dangerous stuff, like rock slides, a mutant lizard, and atomic solar flares. The Captain and the Martian Emperor had just realized the importance of working together before I slipped off into a deep, dreamless sleep.