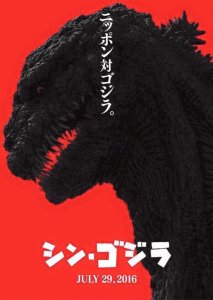 Earlier this month, I was quite excited to watch the newest Godzilla movie. For many, this wouldn’t be a big deal, but for me, it was a very special day. I enjoyed the last American Godzilla movie in 2014, but I’ve always had a special place in my heart for the Japanese series. The last of those, the poorly named Godzilla Final Wars, came out in 2004. Twelve years later, Toho Studios  is back with Shin Godzilla. We drove three hours to the nearest theater showing it, the Alamo Drafthouse in Kansas City. It was a great experience, start to finish.

I wouldn’t usually mention the theater itself in a movie review, but the Alamo Drafthouse is worth talking about. It was my first time at one of these establishments, and it was probably the best trip to the movies I’ve ever had. Instead of playing boring commercials before the show, we were treated to a delightful series of Godzilla-related shorts. Several vintage trailers for older Godzilla movies made up the bulk of the pre-show. There was a brief bit of a Godzilla Island episode (a late 90s TV series that used actual action figures for the monster scenes). I especially loved the Spectreman clip and Bambi Meets Godzilla. All the quirky stuff they showed us got me even more hyped for the film itself.

I’ve been to exactly one theater that served food other than popcorn and pretzels before. It was less than amazing to eat bad chicken tenders and average french fries while sitting in a standard theater seat. The Alamo Drafthouse does it much differently. A helpful waiter took our order before the movie began. Just as the theater darkened, he returned, delivering our drinks and popcorn unobtrusively. There was a narrow table running the length of each row, very convenient for holding drinks and food. About a half hour in, our burgers arrived. They were fantastic. Connor and I had fries, while my wife chose to have hers on a bowl of greens and other salad-like stuff. Our drinks and popcorn were refilled every twenty minutes or so. Never once did the wait staff interrupt the movie, even when helping other people. The food was much better than I was expecting, and just added to the wonderful time we had watching the movie.

So what about the movie then? Was Shin Godzilla any good? I think it was great, and I’ll tell you why. We are now entering a spoiler zone, so if you haven’t seen the movie, you might want to stop reading. 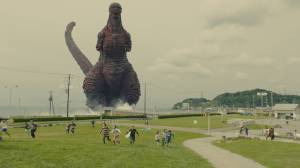 Ever since the first Godzilla in 1954, all subsequent movies called back to the original monster. Even when the series was rebooted in 1984, 2000, and beyond, there was always a plot point about the return of the creature. Shin Godzilla abandons this concept. For the first time in over five decades, Godzilla is brand new, something never seen before, without any historical precedent. It’s refreshing to see Godzilla treated in this way. When you don’t automatically know it’s a giant radioactive reptilian monster, it adds to the sense of dread and danger of it all.

Compounding the sheer terror about what Godzilla might be is the shifting appearance of the creature throughout the film. At first, Godzilla is more a meteorological phenomenon, causing floods and such. Then a gargantuan tail and spiky back appear, causing panic. When Godzilla finally makes landfall, it looks far more alien than any version we’ve seen before. Initially, you see large, googly eyes which are almost comical, but then the undulating, tadpole-like nature of the beast is revealed and it’s horrifying. Over time, Godzilla evolves into more and more dangerous forms, before eventually taking on the more traditional bipedal stance. Even in this iteration, however, Godzilla is a far more revolting abomination than it has ever been before.

The historical theme for Godzilla has always been the dangers of nuclear weapons. In Shin Godzilla, the focus shifts away from the threat of external nuclear powers. The context is clearly the Fukushima disaster from 2011. Again and again, the government is portrayed as slow and ineffective in its response to Godzilla. These same concerns have been voiced concerning the release of radioactive material from the Fukushima nuclear plant after damage from a tsunami. In Shin Godzilla, bureaucrats are indecisive when dealing with the threat of the monster, and their ineptitude costs many Japanese lives. After one particularly grueling scene, many of the “old guard” politicians are killed, leaving behind only minor officials who are even less prepared to deal with Godzilla. It’s refreshing to see these new themes being used in a Godzilla film.

One of the best things about a giant monster movie is seeing a huge creature tear up a city. In Shin Godzilla, the level of destruction is off the charts. Not only is Godzilla now bigger than any previous iteration, it has more raw power than ever before. The classic atomic breath is brilliantly realized, and both awesome and awful in its use. The new ability to shoot beams from the back spines and tail is somewhat controversial, but I felt it made sense and was executed well. There is a sense of absolute hopelessness when seeing the sheer entropic force that Godzilla has. There is a sense of an ever growing death toll, something that is often glossed over in other kaiju films. This gives the scenes of destruction much more emotional impact than you’d expect.

As far as the special effects go, Shin Godzilla easily has the best of any previous Toho film. It compares quite favorably to the 2104 Godzilla, though Shin Godzilla had but a fraction of the budget of the American film. Not once did I think “MAN IN SUIT” while watching. Suitmation was likely still used but it looked brilliant, regardless. The cinematography was quite unique, much different than the standard monster movie fare, and the soundtrack was a great balance between classic themes and modern style. It’s easily the most cinematic film in the series since the original way back in the 50s.

I simply adored Shin Godzilla, and can’t recommend it highly enough. It’s a big change from previous films, for certain, but not an upsetting one. The film seems to have been a big hit, and the ending was quite ambiguous, making it likely that a sequel will eventually come. I am very excited to see what direction Toho goes in the next Godzilla film. The little kid in me just can’t wait to see this new, creepy Godzilla take on another monster, if indeed that’s the direction they go. But they might not. That’s fine too, as there are still plenty of interesting stories that could be told with just the Big G alone…