Why I Love the Godzilla Movies of the 90s

The Pop Culture League challenge this week is another great one. Here There Be Monsters! I knew exactly what I wanted to write about: the King of Monsters himself, Godzilla! I have been a big fan of Godzilla ever since I was a kid. My first exposure to the big G was at the public library, in the Crestwood Monster series of books. I read all those books over and over again, but Godzilla was my favorite. (I’m lucky enough to still have a set of those books today!) Godzilla made frequent appearances on Saturday TV, and I remember watching many of the older Showa series Godzilla films on a grainy black and white TV set in my bedroom. We also rented Godzilla ’85 several times in the late 80s.

Then, in 1997, a new Godzilla movie came out. It wasn’t great, by any stretch of the imagination, but it did get me to thinking about my favorite monster again. By 1999, I was married and had a five year old son. In October of that year, AMC ran its annual Monsterfest, and ran nearly all the Godzilla movies, including several that I had never seen before. It turns out that they kept on making Godzilla movies after 1985! I was thrilled to learn about this, and went online to find out more about them. Between our VCR tape of Monsterfest and obtaining a few releases on VHS (thankfully plentiful due to the marketing of the ’97 American movie), my son and I were able to watch all the movies in what is known as the Heisei era. We watched them time and time again, wearing out the tapes. When son #2 arrived, we upgraded to DVD and eventually Blu-Ray. We rewatched all the 90s era movies in preparation for the 2014 American Godzilla, and with a new Japanese Godzilla being released this year, I decided to go through my favorite era in Godzilla history one more time. Here are quick reviews and ratings of each of these great films. 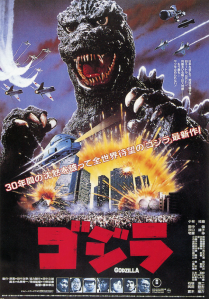 The Return of Godzilla (AKA Godzilla 1985)

In 1984, Toho brought back Godzilla after over a decade off. No longer the good natured defender of Earth, this time Godzilla was back to his roots as an unstoppable destructive force of nature. I have, as of this writing, only ever seen the American release of the film, which added in Raymond Burr, just as the 1950s Godzilla did. We had this on VHS, but it was extremely hard to get on DVD. Just last month, the movie was released on Blu-Ray. I am looking forward to watching the original, un-Americanized version for the first time.

This is a solid entry. A scientist merges Godzilla cells with those of plants, hoping they will be able to thrive in desert conditions. Terrorists attack, destroying the cells and, sadly, killing the scientist’s daughter. The grief stricken father merges her cells with those of a rose, in order to keep her soul around. He also manages to add in Godzilla cells, because why not? The resulting creature is a plant-Godzilla hybrid, which is one of the coolest looking monsters you will ever see. Eventually, the big G shows up, there’s a titanic tussle or two, and it’s over. Weird, and quite dark for the series, but very watchable.

Rating: 4 out of 5 Angry Roses

This is my personal favorite of ALL Godzilla films! It has literally everything. Time travellers from the future come to 1991 to meet an author. They plan to test his theory: Godzilla was a”Lost World” type dinosaur on a Pacific Island that mutated after exposure to radiation from nuclear weapons. They all go back in time, planning to destroy Godzilla before he is created. However, the future people leave behind three strange “pets”. Upon returning to the present, the critters have been mutated in Godzilla’s place, turning into King Ghidorah! The evil future people plan to use the three headed abomination to knock Japan down a peg, as they are the world leader in the 23rd century. The army uses a nuclear sub to recreate Godzilla (say what?), and the Big G and King Ghidorah fight! Godzilla wins, then attacks Tokyo. Everything looks bad, but then the sole friendly future traveller saves the day, piloting a cybernetically rebuilt version of King Ghidorah and drives Godzilla off. It’s absolutely nuts, from start to finish, and I love it.

Rating: 6 out of 5 Time Paradoxes

Godzilla Vs. Mothra: Battle for Earth

One of the things I liked about the Heisei era Godzilla movies was the continuity from one to the next. One of the major recurring themes is that humans are destroying the environment. Mothra appears in this one, returning after many classic appearances, in her traditional role as defender of humanity. Her darker foil, new character Battra, fights instead to defend the planet itself. The two come into conflict, because SYMBOLISM. Godzilla shows up, naturally, and he’s pretty much against both humans AND the earth. Mothra and Battra put aside their differences and take him on in both larva and flying form. The fight scenes in this one are particularly great. The fairy twins and their song are among our favorite parts of the entire franchise. 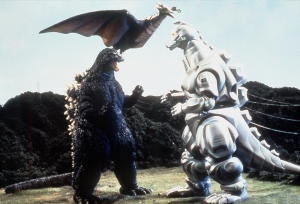 I love robots, and I love Godzilla, so it’s no surprise that I also love Mechagodzilla. Toho triple dips here by bringing back two more classic monsters, in addition to everyone’s favorite metal dinosaur. Rodan returns, also evolving into a more menacing flaming form known as Fire Rodan (makes sense). You’ll either love or hate the third returning alumnus: baby Godzilla! I’m not a big fan of the tyke, honestly. I know it seems odd to say it, in a genre known for goofiness, but the baby is just a bit too cheesy for my taste. Still, this one has Mechagodzilla and some great fight scenes, so I’ll bump it up higher than it by all rights should be.

After the last movie drew heavily from the roster of classic monsters, we have a new main villain in this one. Pay attention here, or you might get lost. So apparently some Godzilla cells from Biollante escaped into space, and made their way through a black hole. The cells came out and formed into an evil version of Godzilla, with all sorts of spiky glowing crystals on its body. Sound weird? That’s because it is. It doesn’t make much sense at all, but really, is that a bad thing? Baby Godzilla is unfortunately back and more cutesy than ever. I love the way Space Godzilla looks, and the human-controlled combiner robot Mogera is pretty sweet. Still, this is unquestionably the weakest entry from the Heisei era. 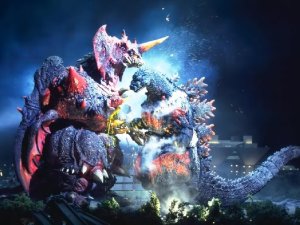 After years of absorbing radiation, Godzilla is overheating. If he goes critical, Earth will be destroyed in the ensuing explosion. Scientists develop a freezing ray and use it to cool off the Big Red G. Meanwhile, baby Godzilla is now larger and renamed Godzilla Junior. The main baddie, Destroyer, is composed of multiple smaller critters that merge and evolve in several stages. Junior fights Destroyer, who hurts the little guy badly just as Godzilla arrives, red hot and ready to explode. The big guy fights valiantly then goes into meltdown. The resulting surge of energy defeats Destroyer, and then Godzilla dissolves into goo. Suddenly, the radiation levels fall, reviving Junior, who is now full sized! This was lots of fun, and a great send-off to the series, for sure.

Rating: 5 out of 5 Freezing Lasers

In ten days, I will be watching the latest Japanese Godzilla film! It’s called Godzilla Resurgence, or Shin Godzilla. I’ve tried to avoid spoilers since its release in Japan over the summer. It’s a shame I have to drive three hours away to get to a theater that’s actually showing the movie, but that’s just fandom for you. I’ll be sure to write a review with my thoughts on the new movie here!

Here are some of the other league entries for the week, or you can check them all out here.