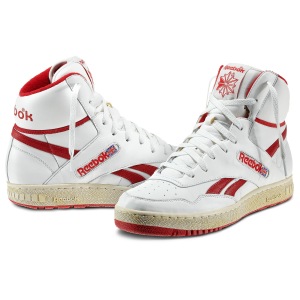 On our way back from Michigan earlier this month, we stopped in Effingham, Illinois. We gassed up, grabbed a bite at Steak N’ Shake, and checked out the Nike outlet store. Connor got a pair of new shoes. This might seem insignificant to most, but it wasn’t for him, nor, by extension, for me.

I have to tell you a bit about my father to explain why. My dad didn’t have a great childhood. They were poor, but it was more than that. To hear Dad tell it, my grandpa was a hard man who was quick to get angry. All Dad’s stories are about how his father whooped him for this, or that, or made them work all day weeding in the garden, that sort of thing. Dad didn’t have much when he was growing up. There weren’t many books, toys, or birthday gifts. Clothes were hand me downs. So were shoes.

Dad got a good job right out of high school and eventually moved from the factory floor into sales and then management. He worked very hard, for long hours, in order to provide for us. I think his work ethic was due largely to the struggles of his youth. We never lacked for new clothes, new toys, new books, or new shoes at any point in my childhood.

When I was in junior high, I became very concerned about my appearance, like many teens do. I’d been teased and bullied in elementary school, but junior high was better. I wasn’t made fun of very often and got along well with most people. I may not have been Mr. Popularity, but I was “normal” at last and determined to stay that way. Nice clothes, contact lenses, spending hours making sure my hair looked just right, all of it was to maintain my newfound status.

One day, a classmate of mine who I will call The Creep made a comment about my shoes. The shoes were pretty cool, in my opinion: white leather high tops with a contrasting black stripe.  The Creep declared my shoes totally lame, and made disparaging comments about my family’s gross annual income. Clearly we were too poor to get anything but Wal-Mart shoes.

His comments about my footwear really bothered me. We weren’t poor in any sense of the word. Our shoes (and most of our clothes) normally came from Penney’s or Sears or somewhere like that. This pair, though, was, in fact, from Wal-Mart. I remembered the conversation my parents had before I got them. My feet were growing like crazy, and Dad decided it made more sense to get a cheaper pair since I wouldn’t be likely to wear them long. It was a responsible decision and I had no problem with the cool white and black high tops. But then The Creep made fun of my new shoes, and now I was embarrassed to wear them.

Fall arrived, and with it, the Penney’s Christmas catalog. I set my heart on a pair of new shoes in its pages. They were Reeboks, glorious white leather with red trim. High tops, naturally. They were very expensive, but that just added to their appeal. I longed for the day when I could wear them to school; no one could possibly make fun of my choice of footwear with those beauties around my ankles! 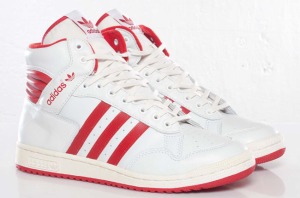 Shortly after Thanksgiving, Dad looked over the catalog with me. He pointed out a pair of Adidas sneakers on the same page as the Reeboks. He asked what I thought of the Adidas. I thought they weren’t Reeboks, that’s what, and I let him know it. I didn’t think much of our conversation. Christmas day came, and with it, the longed-for Reeboks. I put them on immediately. All was well with the world. I wore them until my feet grew again, which wasn’t very long. I dearly loved the shoes, and thought of them fondly even after I outgrew them.

However, when I was a bit older, Mom told me more of the story behind those Reeboks. Dad had already ordered, picked up, and even gift wrapped the Adidas shoes from the catalog when he asked me what I thought of them. Seeing how much I wanted the Reeboks, Dad went to the trouble of returning the Adidas high tops and purchasing the more more expensive pair instead.

This news totally shifted my mindset. Before, my red Reeboks were a fond memory, but now, ironically, I was ashamed of them. How could I have been so shallow? The Adidas shoes were almost exactly the same as the Reeboks. The only real difference was the logo and the brand name. Was I so petty, so concerned with what was popular, that I had acted like a spoiled brat? Yes. Yes, I certainly had. That experience changed me. I was no longer worried nearly as much about whether my jeans were Levi’s, or my shoes were Nikes, or whatever. No one who really mattered to me cared about stuff like that anyway. Why should I care about it?

Fast forward again to my adult life. When it came to raising my own children, I was determined that they would not ever be concerned with such trivial matters as name brands. Clothes, shoes, backpacks, school supplies, all of these things were purchased based on whatever made the most sense financially. My wife enjoyed finding things for the boys at garage sales and thrift shops, or factory outlets. My boys never, ever complained about this. Not even once.

Back in that Nike outlet store in Effingham, Connor was looking at the shelves full of colorful shoes very carefully. He picked out two pairs. One of them was expensive, slightly more than the price of my Reeboks when adjusted for inflation. The other pair cost about half that. I told him to try them on, and Deana and I watched as he got the expensive ones out first. They were clearly his favorite; he had gone back to look at them multiple times. The other pair weren’t nearly as cool looking. He had pulled them because they were cheaper, and this made me very proud of him.

As I stood there, smelling the new shoe smell, hearing the crinkle of the tissue paper stuffed in the toes, I thought back to my Reeboks. I’d wanted those shoes for the wrong reason. It wasn’t because they brought me joy, but because they fit someone else’s idea of what was acceptable. I also thought back to all the hand me down shoes and jeans and slacks that Connor had worn, without the slightest protest, for his entire life. He’d never had any shoes this nice, this fancy. I’d totally spoiled him when it came to Power Rangers toys and Xbox games and Blu-rays, but not shoes.

Connor stood up, just a smidge shorter than me now. He took a few steps, trying out the feel of the slick gray high tops. I had him lean back on the heel and lift his toe, just like my dad always did for me. There was a thumb’s room for growing. “How do they feel?” I asked him.

“Good, they feel good.” He looked down at his feet with eyes full of hope. I teased him that he would probably run faster and jump higher in them; that’s what new shoes do, right? Connor smiled and sat down to try on the other pair, but I stopped him. There was no need.