I’ve figured out that people who are my age are the target demographic for most everything that is mass marketed these days. Properties that were big in the 80s when I was a kid are being mined voraciously for presentation in movie theaters and store shelves. Transformers, Star Wars, the entire Marvel cinematic universe (not purely 80s, but along the same lines), the list goes on and on. And now, Ghostbusters, a classic film beloved by many, is the latest nostalgia-fueled hype machine.

I like Ghostbusters. It’s a great movie. It’s perfect in nearly every way. However, I don’t LOVE Ghostbusters, not like I love Star Trek or Indiana Jones. I’ve probably watched it two or three times with my kids, but it’s not an annual must watch, like, say, Ferris Bueller’s Day Off. I don’t own Ghostbusters on DVD or Blu-ray. I like it, but I don’t go nuts for it; that’s the point I am trying to get across.

A few months back, news broke that Ecto-Cooler, a flavor of Hi-C drink that was loosely tied to Ghostbusters, was coming back. I generally ate school lunches as a kid, so I didn’t drink milk, and not much Hi-C of any flavor. I don’t have the nostalgia for it that I do Boo Berry or C-3POs cereal. However, everyone online was losing their minds over Ecto-Cooler’s return. When it appeared, cases of the retro drink were being sold on Ebay for exorbitant prices. I began looking for it when we went to the store, with no luck. Not finding Ecto-Cooler made my desire for it increase. I checked online to see if I could order some at anything close to retail price. Alas, it sold out nearly immediately when it did come in stock anywhere. 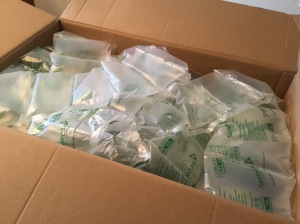 Lo and behold, on July 1, my buddy Nick messaged me that Ecto-Cooler was in stock at Amazon. We were in the car at the time, driving to a church meeting. Turns out Ecto-Cooler is one of those Prime Pantry things. Prime Pantry is basically a method of ordering groceries and such where you choose items that fill up a percentage of a large box that is shipped for a flat rate. A case of twelve Ecto-Cooler cans cost $6.24, but filled only 22% of the Prime Pantry box. It seemed wasteful to ship the whole box for a drink I’d never even had before, and there were only five minutes before church services began. I first decided to just skip it and hope that the green stuff was still in stock later when I could fill that box more wisely.

But then, the anticipation and hype welled up in me. It was too much to resist. I filled my shopping cart with random stuff from Amazon’s suggested items. I ended up with a Prime Pantry box more than 99% full, and all it cost me was $55.86, including $5.99 for shipping. WHAT A BARGAIN, AMIRITE?

It turns out Prime Pantry boxes aren’t two day shipping. And it also turned out we decided to travel to visit Deana’s folks in Michigan for a few days. We left on the day the box would be delivered. On a highway somewhere in Indiana, Amazon notified me that our package had been delivered. My case of Ecto-Cooler was waiting on our porch. Worried that a big box from Amazon shouldn’t be left out for the duration of the trip, I contacted a friend to pick up the box for me.

Knowing my Ecto-Cooler was at home ready to drink turned my anticipation into something approaching obsession. I badly wanted, nay, NEEDED to taste it. We returned home late last Saturday evening, woefully, too late to stop and get the box. Sunday morning and afternoon were taken up by worship services. As soon as afternoon services were over, I texted my buddy. No response. We went shopping, stopped and got drinks (none of them green, sadly). Finally, early Sunday evening, I heard back from my friend. I wen to his place, made some small talk, grabbed the much larger than anticipated box, and headed home. 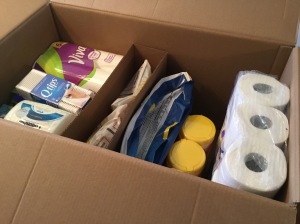 Here’s what was inside:

Oh, and, also, Hi-C Ecto Cooler Citrus Juice, 11.5 Ounce (Pack of 12), not even remotely close to optimum drinking temperature. Into the fridge three cans went. I waited impatiently for them to cool. To pass the time, I opened the packages of the Special Limited Edition Ghostbusters Twinkies I had picked up earlier that day at the store. Did I forget to mention that? Yes, the Ghostbusters hype was real. I don’t even like Twinkies, but one package boasted “Key Lime filling”, and I do like Key Lime. The other was coated in “White Fudge” which made it sound like a delicious Little Debbie Zebra Cake. As the temperature of the cans slowly dropped, I laid out two Twinkies to eat with my Ecto-Cooler, one of each flavor.

Finally, FINALLY, the cans were cold. I cracked one open, pouring a small sample for Deana and Connor. At long last I took a swig myself. The cool, tangy liquid hit my tongue sharply. I breathed in, like wine experts do in movies, trying to savor the aromas and distinctive flavors. I was expecting to have my mind blown, like the Stay-Puft Man when the Ghostbusters crossed the streams. 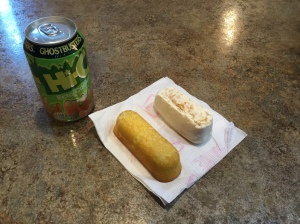 It was OK. It reminded me of orange soda without the bubbles. Nothing special at all. Ect-OVERRATED.

I was disheartened. Perhaps the Twinkies would provide a more overwhelming culinary sensation? Not really. The Key Lime filling was barely lime at all, and the cake was pretty greasy. The White Fudge was all right on the outside, but the filling was too thick and gloppy. It reminded me of meringue, which I don’t care for at all.

It has been two days since the Ghostbusters marketing juggernaut bowled me over. I drank one Ecto-Cooler yesterday. The remaining Twinkies sit, uneaten, in the cabinet. I’d rather have a Cosmic Brownie over either of the two sponge cake treat options, any day. On the bright side, I’ve got enough wipes and TP to keep my bum happy for several weeks, and plenty of chips for lunches when I start back to work next week.