A Few Thoughts on Herb Trimpe

Earlier this week, news broke of the death of comic book artist Herbe Trimpe. As a long time comic book aficionado, I was deeply saddened to hear of Mr. Trimpe’s passing. He was best known for his run on The Incredible Hulk in the 70s and perhaps his greatest claim to fame was that he was the first artist to draw Wolverine in the pages of a comic. The Canadian mutant would go on to be one of the most recognizable and popular heroes in all of comics once he joined the X-Men.

I am a huge fan of Herb Trimpe’s work, but not really the stuff he is best known for. I have only a handful of solo Hulk comics in my collection, as I prefer him when he is on a team. And Wolverine is a character I really loved back in the Claremont/Byrne days but who has changed into something far less heroic and, to me, less compelling as of late. Setting aside the Gamma Goliath and Logan, what I really love about Herb Trimpe’s work is the stuff he did on non-mainstream titles.

Trimpe was never a big shot all-star comic talent, and I mean that in the best way. His art wasn’t the flashiest, nor was he a household name (in my house even, where we talk about comics more than most). He was a solid, reliable artist who was extremely prolific, yet he never seemed to phone it in or have an off-issue like others did. Jack Kirby was a clear influence on Trimpe, and that only adds to my admiration for him. Trimpe kept up the high quality work even when given assignments for lesser known media tie ins, which was probably among the less desirable work that was available. It was these weird, often short-lived books that made me a big fan of Herb Trimpe and his style.

Herb Trimpe was involved with Marvel’s Godzilla comic, which ran twenty-four issues beginning in 1977. The Showa era of Godzilla films had ended, yet the character was still popular enough that Marvel licensed the non-gamma green giant. Trimpe’s pencils were brilliant, and took Godzilla across the United States, battling many Marvel heroes along the way. My favorite was his encounter with Devil Dinosaur, a Kirby creation I’ve always loved.

After Godzilla, Trimpe took on art duties for Shogun Warriors, a comic based on a toyline based on Japanese giant robot anime. This is my favorite of all Trimpe’s work. Even though the concept was a bit goofy (or maybe a LOT goofy), he gave it his all and Raydeen, Combatra, and Danguard Ace never looked better. The series was unfortunately short-lived, lasting only twenty issues, but it was truly epic in scope. 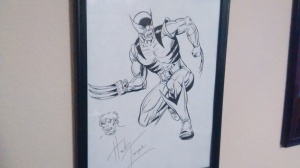 Afterwards, Mr. Trimpe continued work on comics based on toy licenses. He illustrated G.I. Joe: A Real AMerican Hero #1, and that title went on to extreme success, lasting over a decade. He also drew three issues of The Transformers, and they are among the most memorable of that entire series. His full page illustration of Buster Witwicky dismantling Jetfire via thought (see the gallery below) is particularly impressive. Herb Trimpe worked on Godzilla, Shogun Warriors, G.I. Joe, and Transformers, a fact I find mind-blowing. These are some of my favorite characters of all time!

I told this story in my book, but it bears repeating. I actually met Herb Trimpe several years ago. I had never been to a comic convention before, and had my copy of Shogun Warriors #1 with me for Mr. Trimpe to sign. I waited in line for quite a while, making small talk with the other fans. Almost all of them had copies of Wolverine’s first appearance to be signed. I felt a bit embarrassed when they asked what I had brought, and it was a book worth less than a McDonald’s value meal. However, Mr. Trimpe’s reaction was different. He told me he hadn’t seen one of those in years, and I told him it was special to me because of childhood memories. He nodded his head as he signed, and then I got to watch him sketch Hulk’s head on a print of Wolverine that he had available. (It seemed right to have Hulk and Wolvie on the same page, else I would have asked for Optimus Prime, maybe). Mr. Trimpe was kind and welcoming, even though I know he must have been tired from signing books all day. I got a frame and hung the print on my wall, and it is there to this day.

It was a pleasure to meet Herb Trimpe, and I treasure the brief time I got to spend with him. I am saddened by his passing. He may not be one of the biggest name artists in comics, but he had a prolific career and produced some incredible work, maintaining quality for years and years. To me, that makes him memorable.