I am a huge, HUGE fan of the whole Lazy DM movement (Thank you Sly Flourish). 5th edition is quite a bit easier for lazy DMs to work with than 4th edition was, which I very much appreciate. However, sometimes, you just want a huge battle map with tons of minis and scenery. My session this past weekend was one of those times. I spent almost all of my prep time not in the Monster Manual, or the Dungeon Master’s Guide, but at my painting/crafting table.

I like to do big, memorable encounters like this at the beginning of a D&D session. I realize that is backwards from what you’d expect, but I’ve had too many Big Bads not get a fair shake since we only had 30 minutes left for the encounter. So far, it has worked out pretty well, and my players don’t seem to mind at all. Using cliffhanger endings seems to keep the momentum going between sessions as well, which is a nice bonus.

A quick bit of story: my players are lost on the Isle of Dread, and had just returned to the village of Tanaroa after retrieving some missing villagers from a lair of lizardfolk. The lizardfolk attacked the huge wall guarding the village, and the players, along with some important NPCs, village warriors, and zombie minions, were set to defend the village. 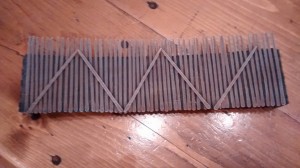 The first thing I needed was the wall itself. I had picked up a piece of Mage Knight terrain on clearance several months ago, the Castle Gatehouse. That took care of my gate, but now I needed the rest of the wall. I dug through some junk I had accumulated and found the perfect item: craft sticks that were pointed on one end. Regular craft sticks would work fine too, I imagine, but these looked more authentic, like they had been sharpened for defense. Other than these, I only needed a strip of cardboard and some plain ol’ Elmer’s glue.

I glued the sticks down to the cardboard, leaving about three inches uncovered on either side. Next I used a 1″ brush and some cheapo dark brown craft paint to give it a good first coat. After, I used a smaller brush to paint the crevices between the sticks black, then did a light second coat of brown to fix any sloppiness. Finally, an easy drybrush of light brown made the wall pieces look great. 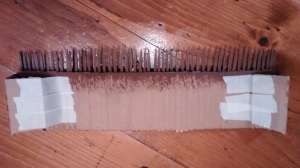 The only problem left was how to make the walls stand. The extra cardboard on the ends was intended for this purpose. Making two folds and taping them down gave plenty of support on either end. I ending up making two wall sections, one for either side of the gate. When stacked next to the Castle Gatehouse piece, they looked pretty good. The Great Wall of Tanaroa was complete.

The next step was to add some huts to the village. I really struggled with a good way to do this without too much effort. (I am lazy, remember?) In the end, I decided to dig out the old Dwarven Forge game tiles from the first Kickstarter, and see what I could do. Making a stone hut was very simple. I decided to leave off the doors, since these are supposed to be primitive huts after all. 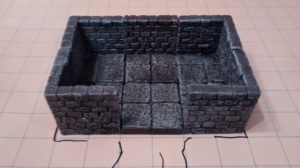 But what to do about the roof? I thought perhaps there were some rooftop Dungeon Tiles, but a quick look at DMDavid’s Index showed that there really wasn’t a good option. (His site is great, and you should visit it often, by the way.) I cut some cardboard a bit larger than the roof size, and set it on top. It was plain, and would work, but something was missing, for sure.

I thought back to the paste, scissors, and construction paper art projects I had enjoyed as a kid. Grabbing a green piece of paper and a pair of scissors, I cut a rough rooftop sized piece, then made repeated cuts around the edges, all the way around the roof. I glued this down to the heavier cardboard I had originally planned to use. Turns out, this step was overkill, and if I were doing it again, I would go with the construction paper alone.

By folding the fringed edges of the paper down, I ended up with a reasonable approximation of a palm-leaf roof over a stone hut. I considered doing some cross hatching on the rather plain rooftop but decided it wasn’t worth the effort in the end. I ended up using two huts like this, and during the fight, village archers used the rooftops as vantage points to defend against the invading lizardfolk. That makes me think, would palm leaves be sturdy enough to hold up a human? Hmm…

All that was left for the battlemap was actually drawing it. As you may have guessed from the pictures above, I used Gaming Paper for this map. I like this stuff quite a lot, it flattens nicely even when rolled up for long-term storage. It’s also easy to draw on with a sharpie. I didn’t go too crazy with details here, just showing a central path, some tar pits, which were the second line of defense if the gate was opened, and a graveyard on the opposite end of the map from the wall. This was used to animate some undead defenders by the friendly neighborhood zombie mistress.

I was excited to use some of my Warhammer Fantasy lizardman army for this session. I had picked up a used lot at a fair price, and the showpiece was a lizardman riding a huge dinosaur. In D&D terms, this was a lizardfolk king riding atop a tyrannosaurus. In order to avoid focus fire issues, I gave the king and his mount a shared pool of hit points. This made for some cool scenes, as when the lizard king would have died, I described that long bloody gashes appeared on the tyrannosaurus, and the blood from these wounds oozed over the king, rejuvenating him. This worked well, providing a cool narrative as well as extending the challenge.

The best part of the encounter, though, was an inventive idea the druid had. He let me know that he intended at some point to polymorph the barbarian, played by my son, into a giant ape. My son had an old King Kong toy that was perfect for this. There was even an action feature where you would push a button on Kong’s back and he would bash with his fist. Conveniently, the lizard king mini fit into Kong’s hand. When the party surmised that removing the king from his mount would break the magical bond between them, all it took was an Athletics contest roll, and then the mighty lizard king was used to pummel his own tyrannosaurus mount into oblivion. My son’s day was absolutely made at that point! 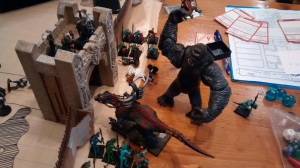 The encounter ended up taking a long, LONG time. In addition to their own PCs, the players ran a major NPC each and a couple even were responsible for village warriors and zombie defenders. This freed me to take care of the lizardfolk attackers, their king, the tyrannosaurus, and also some rakasta and human captives that the lizardfolk had used an enraging poison on before setting them loose in the attack. The fight was finally over after just under three hours, but everyone had such a good time, it seemed to fly by. It was among the most epic experiences of the campaign so far, for sure!

Obviously, I won’t have the time or the inclination to go to such lengths every time. Most of the time, theater of the mind and near/medium/far zones on index cards work just fine. Every once in a while, though, you want something more. You can get great results with the most inexpensive materials. If you don’t have the perfect minis lying around, a trip to the toy aisle of a dollar store can be a great source of inspiration, as well. And if at all possible, include a giant ape in your epic battle scenes. Your players will be glad you did!