Recently, I picked up the Core Set for Star Wars Armada, and I am very impressed with the game so far. Playing with the enormous capital ships and squadrons of tiny starfighters has me giddy with excitement. Only one thing was missing: a cool starfield background to move the tiny ships around on. I had looked around online for some options, but they were all quite pricey.

It occurred to me that I now owned three games that used a 3′ by 3′ board: Star Wars Armada, D&D Attack Wing, and Relic Knights. I didn’t want my dragons flying around in space, nor my Star Destroyer flying over clouds, so being able to switch backgrounds depending on what game I was playing was important.

I decided to see what I could make myself, with two major goals for the project.

1. Be as thrifty as possible

2. Be able to switch the pattern of the board as needed.

Here is what you need to make a board like mine.

The fabric of course is the most important. I was lucky in that my local store had an appropriate pattern and it was the right width. Keep in mind the size of the fabric is an approximate. You only need enough to fasten to the board securely. I went with four inches extra, two per side, but the width of the bolt of fabric was actually 44″. The specs above are a minimum.

Assembly is a piece of cake. Lay out your fabric, put the board on top, and fold over the edges. Use the binder clips at the corners to keep the fabric attached. 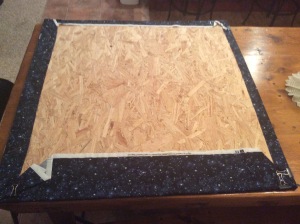 I tucked under the edges of the fabric to keep the corners neat, as you can see in the pictures above. You will be able to see the binder clips on the top of the board, unfortunately, which may bother some who are more OCD about that sort of thing. I am comfortable with it, since by using binder clips I can change from one fabric pattern to another quite easily. You could, of course, permanently attach the fabric to the board by using a spray adhesive on the top side of the board and something like thumbtacks or staples on the bottom side. Seeing as how I want to use the board for D&D Attack Wing, Relic Knights, and maybe other games in the future, binder clips work just fine.

A cloud pattern should work for D&D Attack Wing, but haven’t quite decided what I want as the background for Relic Knights just yet. I’m planning a trip to a fabric store (something I never thought I would say or write in my lifetime) to see what inspires me. A bit more than a yard of fabric should be pretty cheap, especially when compared to mouse pad material mats or other more expensive options. For under $20, I am quite pleased with my starfield playing board, and I can honestly say it adds a lot to the experience of playing Star Wars Armada, and I am certain it would do the same for X-Wing, Star Trek Attack Wing, or other space-based minis games.

A trip to the fabric store yielded a cloud background for just over $8. The pattern isn’t perfect, a little too dark blue in some places makes it hard to see the sky as background and the clouds as foreground. Still, it looks pretty cool having Tiamat and other dragons flying around breathing fire, acid, and ice all over each other.