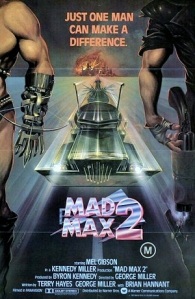 I am a huge movie fan, and have tried my best to pass on my love for movies to my kids.One of our favorite leisure activities is watching older movies as “prep work” in anticipation of new releases. I know this is just what the media moguls want, but still, we enjoy it. We have been rewatching the Marvel movies as Avengers 2 approaches, and another May 2015 release has us excited as well: Mad Max Fury Road.

The first trailer for Fury Road was jaw-dropping. Visually, it was stunning. I do have some reservations that the movie itself will not be nearly as great as the trailer; have they saved the coolest bits for the movie, or not? I suppose time will only tell.

Last fall we watched the original Mad Max, and it was not quite as good as I remember. This is hardly uncommon for movie, TV shows, and other stuff I enjoyed when I was younger. It’s not a bad movie, by any means, just a bit hard to follow. The low budget shows, though I am amazed at how much they did with so little money.

Last weekend, Mad Max 2, or The Road Warrior, whichever you prefer to call it, was on the agenda. In my memory, this was the best of the three Mad Max films, and upon rewatching now, I’d certainly rank it higher than the first movie. It is clearly a sequel; Max bears the scars from the events of the first film in many ways. But it really doesn’t continue the story of Max in any meaningful way.

In fact, Max is relegated to near silence. Mel Gibson has very, very few lines in the film. He is simply a man involved in a situation that is beyond his control. His actions are not heroic, and indeed he acts quite selfishly most of the time. The real star of this film, much more so than in Mad Max, is the world itself. The crazy costumes, the strange vehicles, the mish-mash use of “normal” things in what has been transformed into a bizarre, almost alien world… these are the most impressive elements of Mad Max 2. The post-nuclear wasteland is an old concept now, as it was then, but here it is given a flavor and character that makes it unique.

Watching the Fury Road trailer again, it looks like perhaps the creators have gone this same way. It really doesn’t matter what actor is playing Max, nor who is chasing him, or where he is going. Just seeing another journey through the wicked deserts of Mad Max’s world will be more than enough to get me in the theaters on opening day.