Six Reasons Why Madness at Gardmore Abbey is the Best

As an old school D&D player and DM, I have many fond memories of classic adventures from the past. Ravenloft, Isle of Dread, and many others were among my favorites. As far as 4E adventures go, my favorite was Cairn of the Winter King. But having run my players through several sessions of Madness at Gardmore Abbey, I am of the opinion that it is easily the best 4E adventure, and compares favorably to such beloved classics as Keep on the Borderlands and Tomb of Horrors. Here are six reasons why Madness at Gardmore Abbey is great.

1. The Deck of Many Things

The big maguffin/villain in Gardmore Abbey is the Deck of Many Things. This artifact is one of the most appealing in all of D&D, embracing the random nature of the game. The Deck has been around since the very early days, first appearing in the original Greyhawk supplement. Assembling the deck and debating about whether to draw make the Deck a great source of roleplaying opportunities. Plus, with 4E’s use of cards for powers and abilities, the Deck is a natural fit. 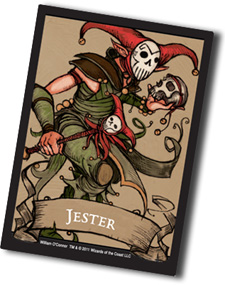 Even better is the inclusion of a gorgeously designed physical deck of cards to represent the Deck of Many Things. I love using props in my games any time I can, and the Deck has been a smash hit with my group so far. Finding new cards here and there throughout the Abbey has added to the coherence of our campaign. The Deck is interesting both in real life and in game, and one of the biggest reasons why Madness at Gardmore Abbey is awesome.

One of my biggest pet peeves is when adventures refer to miniatures, maps, or tiles that I don’t have access to. It’s nice to have a big collection of miniatures available, but with the old minis game out of print, and the new Dungeon Command series less than a year old, it can be expensive to find just the right one. Maps and tiles are much the same; sure, I can simply use what I have on hand, but it still bugs me when my best option is to draw a map on Gaming Paper.

Madness at Gardmore Abbey doesn’t have these problems. Sturdy tokens, similar to those of the Monster Vault series, are included for the most of the monsters and NPCs. A sheet of Dungeon Tiles enables the DM to create the encounters exactly as intended. (One nitpick: the tokens and tiles have a dull finish, not the glossy sheen of standard dungeon tiles and the original Monster Vault tokens.) Best of all, for those like me on the lazy side, excellent poster maps for important fights are also in the box. These are rendered very nicely, but still generic enough to be reused in the future. If you have access to the Monster Vault and the first Essentials Dungeon Tiles set, you’ll be prepared for each encounter in the Abbey.

Though I’ve not had much experience running high level 4th Edition sessions, the problems with paragon and epic level games are well known. Increased options and combinations of powers for PCs leads to excessively long combats as well as broken gameplay. Madness at Gardmore Abbey is intended for characters of levels 6 to 8. Coming in on the upper half of Heroic tier, PCs have plenty of options and good survivability, yet at the same time, they don’t have a fifteen page character sheet to look through every turn. This makes for an adventure that balances challenge with simplicity to great effect. 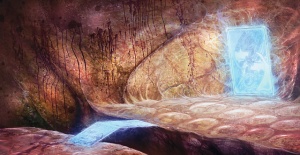 4. Ties to Other Planes

One of the biggest changes in 4th Edition D&D is the “nerfing” of the planes. No longer is traveling to a different plane restricted to high level characters with access to powerful magic. While still dangerous, 4E style planar adventures are possible for characters of more modest abilities. I see this as a net positive; anything that gets players into fantastic environments sooner is a good thing, in my book.

Madness at Gardmore Abbey has direct ties to two planes: the Feywild and the Far Realm. An entire quest chain with significant links to the Feywild is available, and can lead to further adventures in the plane of rampant growth. The Lovecraft-inspired Far Realm has directly intruded upon one location in the Abbey, with suitably horrific events playing out as players explore. As with the Feywild, you can easily toss in some bread crumbs here that lead to further exploration of the dread Far Realm later in your campaign. Extraplanar adventures have a big “wow” factor with players and this adventure gives you an easy way to head that direction if you so choose.

Ask any person on the street what types of monsters show up in a fantasy setting, and you are all but guaranteed to get dragons as an answer. Madness at Gardmore Abbey uses a young red dragon in a showcase encounter. I just ran my players through it, and the fight was a gloriously challenging epic battle that lasted almost two hours. That’s far longer than I typically prefer, but it felt fresh throughout due to the almost video game-like stages of the encounter. I won’t spoil them, but suffice it to say that fighting a red dragon equipped with several cards from the Deck of Many Things is a fantastic experience.

And there’s much more to Gardmore Abbey than just one cool monster. Another iconic creature, the beholder, is a major antagonist, in a truly creepy environment. Orcs, another staple, make a significant appearance, as does an ettin, in a particularly memorable encounter that doesn’t have to be a slugfest. The catacombs beneath the Abbey are full of undead, one of my favorite types of monsters to use. Gardmore Abbey has so many classic creatures inside, it may as well be called “Monster Vault’s Greatest Hits”.

Madness at Gardmore Abbey is intended for characters of level 6 to 8. There is more than enough adventure inside to be the entire focus of your campaign for these levels. You could use only the content inside and spend all of levels 6, 7, and 8 before you got through. An incredible amount of resources, encounters, NPCs, plot threads, and suggestions for smaller side adventures and quests are included. It is really more like a miniature campaign setting than a standard adventure. 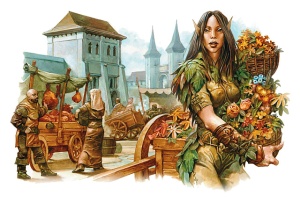 Since my group only plays once a month, and is level 8, I’ve cherry picked the more challenging encounters and quests to use at my table. I’d estimate I’ve only used about one third of the content by doing so. That leaves plenty of cool stuff available for the future. Madness at Gardmore Abbey is a treasure trove of interesting locations, characters, and challenges that can be swapped into nearly any campaign. Whether you use it all in a marathon adventure chain, or simply pick and choose, there is a wealth of useful material here.

As D&D Next is in active playtest, just over the horizon, support for 4th edition has fallen off dramatically. It’s a bit sad that Madness at Gardmore Abbey will likely be the final published 4E adventure. I’d love to have seen more like it, assuming the high quality of this module continued in further products. As it stands, Madness at Gardmore Abbey is the final pinnacle of adventure design in 4th edition, and I believe it deserves to be remembered as one of the greatest adventures in D&D’s rich history.