Using Dungeon! in Your D&D Game 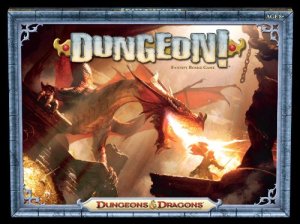 This past week, I went down to my friendly local gaming store and picked up a copy of Dungeon!, the recently revamped version of the classic board game that came out earlier this month. I’d never played Dungeon! before, which is a bit surprising given my love for board game versions of D&D. I’ve enjoyed the short time spent playing the game so far, and it occurred to me that there are components of Dungeon! that could be incorporated into a more traditional D&D gaming session, whether you are running 4E or D&D Next.

Treasure Cards
Perhaps the most obvious inclusion are the various treasure cards in the game. As players explore Dungeon!, they accumulate treasure cards. These cards range in value from 250 gold up to 5,000 or even more. But what makes the cards interesting for use in a D&D campaign are the illustrations. Smaller amounts are represented by a simple bag of gold, but for more valuable pieces, pictures of gems, trinkets, and other treasures are shown on the card.

I’ve grown fond of using poker chips to represent the accumulation of wealth in my campaign. It’s a nice way to combine a physical prop with the slightly boring process of bookkeeping. But what if you want your characters to find a nice gemstone, or a statue made of gold? Handing over the poker chip equivalent of this kind of treasure takes players out of the immersion. But with the cards from Dungeon!, you can instead hand over a small card with a nice illustration of the treasure instead. The gold piece values don’t match up with the D&D equivalents very well, but I think the fact that your are handing the players a physical object to represent their loot more than makes up for it.

Monster Cards
The other set of cards that comes in the Dungeon! box are the monster cards. Arranged in six levels of difficulty, these cards are illustrated with art from other D&D products. I’m not sure where all the art came from, but I do recognize many illustrations from the Monster Vault. The Dungeon! denizens include common D&D opponents ranging from rats, orcs, and goblins all the way up to vampires, purple worms, and dragons. So how could these small cards be of benefit to your D&D game?

We all know a picture is worth a thousand words. I often try to show the party a picture of what they encounter. While the Monster Vault book’s illustrations are great, they are also on the same page as stats, which can certainly spoil the fun. Handing over a small card with just a picture, and no game information, beats giving your players a quick glance at the Monster Vault entry.

The monster cards are very small, so they could easily be attached to initiative numbers with a paperclip, if you use a method like this one for tracking initiative in your 4E game. If you are playtesting D&D Next, and prefer the “theater of the mind” approach, you can use the monster cards to represent relative locations. Telling your players the Black Dragon is surrounded by a protective wall of Orcs is one thing, but representing this with monster cards is another. This might prevent arguments over line of sight, range, etc. that often come up in map-less sessions. 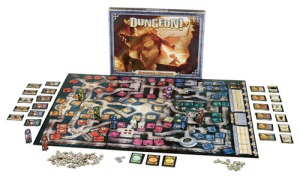 The Game Board Itself
The Dungeon! board itself combines the classic, sprawling map of the original with the slick, modern design Wizards of the Coast does so well. The dungeon sprawls all across the board, a massive, labyrinthine web of corridors. It’s very reminiscent of old school dungeons from the earliest days of 1st edition. But unlike those old maps, this one is meticulously presented, with realistic stone paths and nicely detailed large rooms scattered throughout.

The map could serve as a physical prop for your players. Perhaps they come across the intricate map in the abandoned hideout of a villain. Maybe the royal cartographer has come across the map in his research, and asks the party to verify its accuracy. Finding maps with the promise of ancient treasure may be one of the oldest tropes in the fantasy genre, but that doesn’t mean it won’t be a fun romp for you and your players!

A Night at the Improv
If you are feeling particularly brave, and want to flex your improv muscles a bit, you could even run an entire session using the Dungeon! map itself, and drawing cards for encounters and treasure as you go. Let the players explore the map, and when they get to a new room, draw a card to see what happens next. Maybe it’s just a bag of gold, but it could be a massive sapphire that appears normal, but is in fact the phylactery of a lich. The jade statue the players find might be an intelligent artifact that will answer questions about the rest of the dungeon… but are the answers accurate?

When drawing from the monster deck in an improv session like this, you don’t necessarily have to begin a combat each time. Intelligent monsters might try to hire the party for safe passage outside. The zombie they face might be the corpse of an NPC met previously, which would certainly lead to all manner of role playing opportunities. Of course, sometimes, you’ll draw a black pudding, which means your options are limited to rolling dice for initiative!

Dungeon! is a bargain to pick up for $20 on its own, but when you consider the additional value you get by using some of these elements in your D&D game, it becomes a real steal. Treasure cards, a deck of monsters, and an excellent map prop could all add much to your table. Pick up a copy of Dungeon!, use it in your game, and let me know what you think!