What I Learned from the D&D Next Playtest 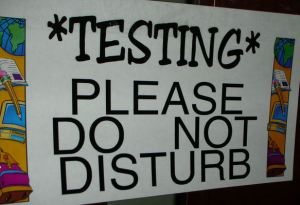 Early last month, our group got together for a session with the D&D Next Playtest material. I was thrilled to be able to get some time in with the new rules, and the players were excited to be beta-testers, if you will, for the next generation of D&D. The evening was enjoyable, as it always is, and now that I’ve had some time to ponder it, I wanted to share my thoughts, just like 90% of the bloggers out there.

First, some clarification as to the makeup of the group. I was the DM, and have had experience with nearly all editions of D&D, though only minimally with late 2nd and 3rd. My son, age 11, plus a twenty-something guy and three fellows ranging from 35-42, were the players. Three of these players had a year and a half of 4E experience, while the other two were newcomers to 4E. Besides myself, only one player had any prevous experience in D&D. For most of the group, 4th Edition D&D is the standard, the only form of the game they are familiar with. 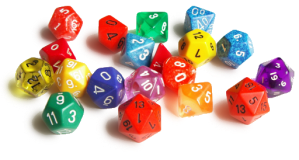 The character sheets themselves were very clear, easy to understand. Though 4E is a different beast, the basic tenets of ability scores, hit points, and to-hit rolls share enough similarities that the players had no big problems at all. The backgrounds, themes, etc. seemed to be a hit, both from a gameplay and roleplaying perspective. These were definitely worthwhile, and will surely be a good source of customization, for players who want to tweak their character a little bit. The hit dice mechanic was a bit harder to explain, but the similarity to 4E’s healing surges helped them assimilate this feature of the ruleset.

One problem that came up was “so what exactly can I do?” The power cards from 4E seem to have spoiled the players a bit. One the one hand, the abundance of power options makes  the game more complex, but on the other hand, powers serve as a good starting point. The non-caster classes, in particular, seemed to be a bit dry, with fewer options. I know that this issue will be addressed in future iterations of the rules, but as it stands, the disparity between spell casting and “I’ll swing my axe… again” was something my players brought up as a negative.

The spells themselves were quite different than the players were used to. Instead of very mechanical effects with only minor descriptors (as in 4E), the spells in D&D Next are more like rules subsystems all on their own, in many cases. For those of us who grew up casting sleep and burning hands, the D&D Next equivalents are easy to understand, if not identical to the older editions. But spells like command or mirror image are somewhat more difficult to pick up on. Adding to the issue was having to locate the spell in the “how to play” packet all the time. It made me wish I had something like my old set of Wizard spell cards from back in 2E. Power cards like 4E have their own problems, but you didn’t have to go scrounging through a rulebook to understand what they did, either. Perhaps a shorthand of some sort, similar to reminder text in Magic: the Gathering, could be added in future versions. 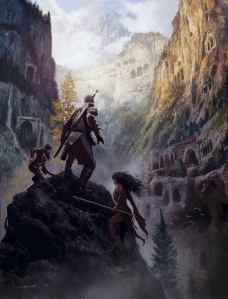 So, on to the adventure itself then. The old-schooler in me appreciated the direct translation of the classic Keep on the Borderlands module. It is perhaps the greatest “open world” type adventure ever. However, I’m not sure it was the best choice for the first major public playtest. The adventure as presented was light on descriptions and details, with more of an emphasis on the big picture. That’s all well and good, but it certainly requires a more improvisational DM style than what I have become used to in 4E.

In a sense, the Caves of Chaos is something like Madness at Gardmore Abbey. It is chock full of cool and interesting things for the DM to use and the players to interact with. There are multiple paths to take. There are lots of different ways to get things done. But it can be tough to make a coherent, enjoyable experience out of it all, depending on your flexibility in running the game. I believe a more straightforward, less chaotic (pardon the pun!) adventure might have been a better choice. Running something with a simpler set of options, like Cairn of the Winter King, as a good 4E example, would allow the DM and players to spend more time evaluating the system itself rather than figuring out what to do next.

Our group experimented with mapless encounters in 4E before, as I detailed in a previous post. I was hopeful that this would make the increased emphasis on the “theater of the mind” would be easier as a result. For the most part, my players had no trouble with mapless fights at all. When we did get the map out, it seemed like a waste of time. There really wasn’t much reason to do so, with the fewer options available to the players. I realize that a more complex, map-based ruleset is coming, but my players definitely see the system as too simple as it stands right now. Perhaps the low level nature of the adventure made the problem seem worse than it really is.

Thus far, my thoughts about D&D Next have been more general in nature, but there was one specific issue we ran into that I feel needs to be addressed. The wizard cantrip ray of frost seems far too powerful. My players ended up fighting a couple creatures that should by all rights have destroyed them: the minotaur and the ooze in the pool. Using ray of frost, they managed to prevail quite easily. By freezing these melee-only foes in place, the wizard allowed the rest of the group to pick them off at their leisure. I was torn between allowing the rules as written, and “cheating” in order to make the fight more interesting. In the end, I let them freely wail on these much stronger foes, but it certainly left a bad taste in my mouth. I’m certain the melee-only players found it boring, too.

Of course, there are many ways the DM can get around ray of frost, but it certainly seems very powerful for an at-will, repeatable effect available at 1st level. I’m not sure what the exact answer to this problem should be. In my mind, altering the rules for the cantrip such that it cannot be used on the same target in consecutive rounds seems like a good compromise. Or perhaps we could steal from the old Mortal Kombat game, and have the freeze effect bounce back on the caster when abused!

Though my overall feelings for D&D Next were mostly positive, I was still mildly disappointed by it. I was expecting something that would fix the major problems in 4E, a set of rules that would be a clear upgrade that I would love and my players would readily embrace. This was not the case, though our experience is admittedly short. The rules as they stand right now feel too watered down, like they have swung too far on the complexity spectrum towards simplistic. However, it’s very early on in the playtest, and I know the D&D Next rules are in flux. I am very interested in the modular parts that will be coming along in the future, and hopeful that we can find a good balance for us as a group. In the meantime, we’ll keep playing 4E, and enjoying it.